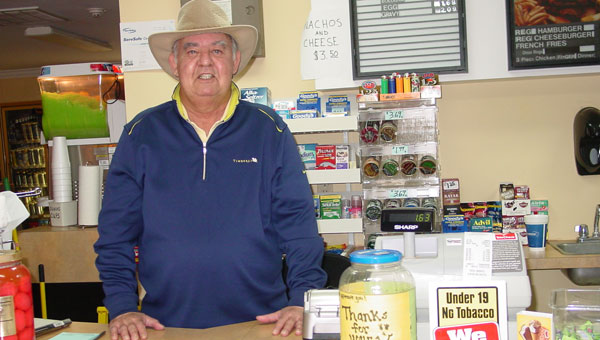 The folks in Pea Ridge are excited to have EZ Ed’s Grocery and Deli open conveniently on Shelby County 54 West, where Hoss’s was once located.

In an early morning visit with Gentry, he confessed that he bought the store because he retired, needed something to do, and that Pea Ridge is really “home” to him.

“It is wonderful to have somewhere close by for gas, a loaf of bread or some milk without driving eight or 10 miles,” said Pea Ridge native Mary Ross. “Everyone thinks the food in the deli is just delicious, too; the sandwiches are great.”

Manager Geraldine Howell said there are big plans for the store. In the deli now they offer a wide variety of breakfast items and later in the day hamburgers, hot dogs, barbecues and other sandwiches.

The menu also features pizzas and plates of barbecue, chicken fingers and hamburger steak, each with a choice of sides.

Howell revealed that in a matter of weeks they will have a full restaurant open on Fridays, Saturdays and Sundays.

Along with Gentry, some of the other local retirees also enjoy the new store and deli.

Clifford Lawley, Thomas Lawley, Jim Seagle and Gordon Fancher often visit with each other over a cup of coffee.

“I guess we are the western division of the Montevallo Romeo (Retired Old Men Eating Out) Club,” said Clifford Lawley.

To get to EZ Ed’s from Montevallo, take Highway 10 to Pea Ridge, then turn left on Shelby County 54 just before you get to the fire station, go about a quarter mile and there