James Monroe Lindsey and his wife, Mary Sarah Ann Little, were married in 1849 and moved to Hillsboro (later Helena) after the birth of the second of their nine children, acquiring 1,060 acres of land along the Cahaba River and Buzzard Creek.

They lived in a two-room log cabin with a separate kitchen structure, as was the custom. A year after the birth of their fifth child in August 1862, James, at age 34, enlisted for service in the Civil War. A private in Company D, 10th Alabama Infantry until the war’s end, several of his letters written home during those years, as well as letters received from his wife, have been preserved by the family. 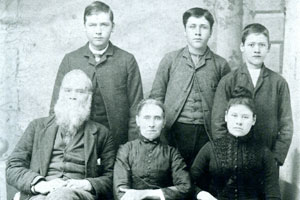 James Lindsey was with General Robert E. Lee when he surrendered at Appomattox Courthouse on April 9, 1865, and was paroled at Burkesville Junction, April 14-17, 1865. Here he is pictured with his wife Sarah, and daughter, Jerome, on the front row. Back row are sons James Robert, Joseph Samuel and Sylvester Lindsey. (Contributed)

Lindsey’s letters give a sobering personal recount of the lack of food, clothing and extreme conditions endured by the soldiers and repeatedly illnesses, writing once, “Girls, I need some socks. I hate to tell you my condition about clothing and rations. I would like to write something that would interest you … but if I were to tell you all I know, it would break your heart.”

His memories from the Battle of Spotsylvania, Va., on May 12, 1864, never dimmed. “Never have I seen so much blood. They killed so many of our men that the trenches fill up (sic) and we had to pick up their bodies and stack them behind the trenches. The rain through the trenches ran red with blood. On this same day, Jeb Stuart died.”

Military records show that James Lindsey was in the Battle of Hanover Junction in May 1864, in action at The Battle of Turkey Ridge, Va., in June 1864 and fought through the Second Battle of Cold Harbor.

Meanwhile, Sarah tried to eke out a living from the farm. This southern family, as did many, experienced constant fear of the “enemy” and were indeed robbed of food, clothing and their finest black stallion. James Lindsey returned home by foot more than three months after the war’s end and the family’s hopes had dwindled.