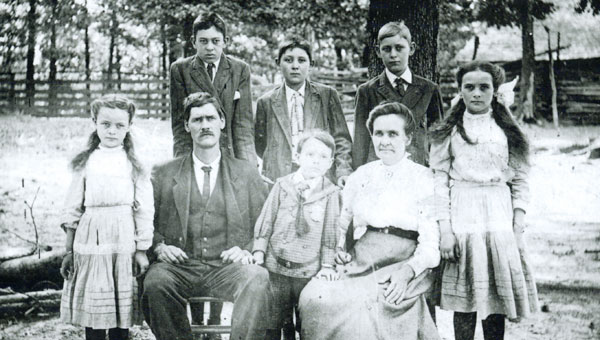 This family portrait of the Sylvester Lindsey family shows, back from left, Sterling, Clarence, Lathan, and front from left, Minnie, Sylvester, John (Buster), Rhoda and Lillian. The Penhale Museum thanks Bobby and Brenda Lindsey and George and Martha Lindsey Patridge of Jasper, for making available their family history documents and photographs. (Contributed)

James and Sarah Lindsey’s nine sons and daughters were brought up in an isolated area with little help from doctors or medicine, other than Sarah’s own home remedies of herbs and roots.

The Kenneth Penhale Museum recently acquired the letters and photos of the Lindsey family. They describe life in the Helena area during the late 1800s, and early 1900s.

After the birth of their seventh son, James Robert, a second and larger house was built on a knoll across the bend of the Cahaba River. This log house had two 16×18 foot rooms divided by a hall, with a front porch, two rock chimneys and a large cellar for food storage.

Recently, Lindsey relatives from Texas and Utah visited Helena and the two home sites in the company of Charles and Charlie Griffin and Ken Penhale. “We were able to see the chimney remains at both homes,” Penhale said. “At the older home, there were daffodils blooming and quince and garlic plants still growing.”

James Lindsey’s brother, Noah, returned from Utah in the 1880s, where he had joined the Church of Latter-Day Saints (Mormon Church) and eventually invited church missionaries to come visit Alabama and teach this religion to those who wanted to hear about it.

This stirred much controversy within the community, even provoking a mob on horseback, ringing cowbells and intent on tar and feathering the missionaries. Lindsey’s son, William Jasper, persuaded the mob to do them no harm on that occasion.

James fed and protected as many as 24 church elders in his home, although he never became a member of their church. Sarah, however, was baptized into the church in the Cahaba River in front of their home in 1887.

In their later years, James and Sarah spent time in Texas where most of their children then lived. Only their lastborn son, Sylvester Steel, remained in Alabama.

Sarah Lindsey passed away in 1910 and James in 1912. Today, Robert “Bobby” Lindsey and his wife, Brenda, live on his grandfather’s property on Lindsey Loop.