Morgan writes about love and tragedy 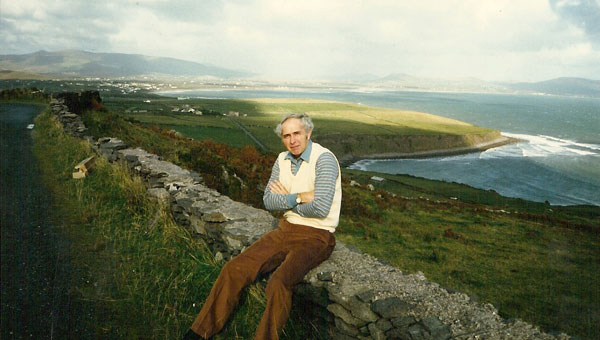 On a visit to Ireland, author David Morgan sits on a wall enjoying the stiff breeze. (Contributed)

In describing this newest book, Morgan said, “Ireland, a country dominated for centuries by England, has given the world many fascinating stories. This story is one of them about love and scandal set against the backdrop of volatile Anglo-Irish politics between 1881 and 1921. It is based on the true story of a man that British officials called dangerous and the people of Ireland called their uncrowned king.”

The author explained he has been fascinated with Ireland since, as a teenager, he saw the movie “The Quiet Man.” He heard about the subject of this latest book in a lecture in graduate school, and an idea for the book about it ran through his mind for more than 45 years before writing it.

In talking about his former colleague’s latest novel, Dr. John Lott said, “Anyone, but especially persons who have an interest in Irish affairs and the fascinating people who shaped them, will find this novel engrossing and entertaining. It is quite readable and, at times, quite gripping in its portrayal of the personal cost to those who participated in these great moments in Irish history.”

When Morgan was asked what inspired his writing, he explained curiosity led to research, and the products of research led to writing about them. Issues he was particularly interested in led to writing novels. Two of his novels are futuristic, one on the currently “hot button” topic of illegal immigration, and the other on the much debated issue of euthanasia.

After 33 years of teaching, Morgan retired in 1997. He had taught at Patrick Henry College, Texas A&M University, and the University of Montevallo. He and his wife, Judy, are spending their very active retirement years in Montevallo.

In addition to professional articles and publications, Morgan has written books of history, religion, a fable and several novels. Most of his books — including the subject of this writing —are available at Amazon.com.