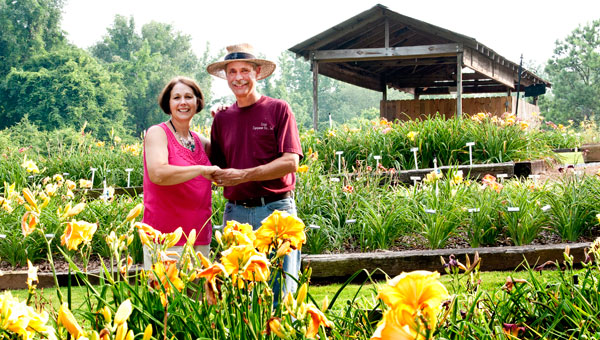 Morris and Becky Parr at Dancing Daylily Garden demonstrate the do-si-do near the flowerbed that contains their namesake daylily. (Contributed)

The Central Alabama Daylily Society will be expanding its roots, so to speak, and bringing its annual plant sale to a new and second location at Myers Plants and Pottery in Pelham on April 13. The sale will begin at 8 a.m. and the first 50 buyers receive a free daylily.

Morris and Becky Parr, owners of Dancing Daylily Gardens in Helena, and other CADS and AHS members will be on hand to answer your questions about choosing daylilies and how to plant and care for them.

On Becky’s work apron you will see embroidered Northwind Dancer, the daylily used in their DDG logo. Becky notes Whistle Stop Tour, a ruffled red with lemon-lime green throat and Watermelon Martini, a fragrant red with lime ruffled edges as popular choices for dramatic accents for your garden. A daylily’s largest bloom opens first — for just one day — followed by the other buds in turn, so each plant may bloom for over a month. One of the largest blooms at Dancing Daylily Gardens is the 8-inch bloom of the aptly named Great American Pie Pan.

The Parrs even have a daylily named in their honor. Dosey Doe is a full, ruffled peach daylily by breeder Dale Hensley. The name is a nod to the couple’s other love — Cajun, Zydeco and ballroom dancing.

It’s true that many people think of a daylily (Hemerocallis) as the “ditch” lily, or “that orange flower growing along country roads.”

Daylily aficionados, however, are not most people, hybridizer Scott Bennett of Homewood observes.

“Their obsession has led them towards advancements in what is often referred to as the modern Daylily, now available in practically all colors, shapes and sizes.”

Many a hybridizer is on the quest for a true blue daylily — there are already some handsome purple cultivars and some that combine blue and purple. There are varieties considered to be blue-eyed, such as Bluegrass Music, Bluegrass Memories and Jitterbug Blues.

Note also, that the Alabama Beekeepers Association will be exhibiting at Myers Plants and Pottery on April 13, as well, with area honeys available for tasting and purchase.