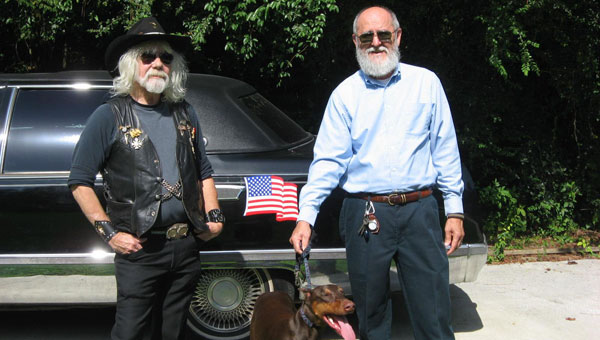 Alton Young, “SlimJack,” and Gene Garza, all characterized in “Guys Are Us.” (contributed)

Dr. Gene Garza, in association with Alton Young, has written a modern-day “Western” set in the Deep South.

“Guns Are Us” is the story of two retired college professors who, due to some rather bizarre happenings, adopted the roles of roaming vigilantes.

The reader would likely agree that Garza’s own description of the story is accurate: “This is a spirited, irreverent tale of inadvertent adventure, heart-stopping action, and menacing crime following Gene and Alton, two retired mathematicians out to save the world one truck stop at a time.”

Not unlike John Wayne or Roy Rogers, our heroes seem to find trouble wherever they go, and in every instance, with the help of their well-trained canine companions, they seek out the bad guys, and soundly trounce them.

“I was inspired by a description that my son, Gene Jr., wrote years ago,” said Garza, “of a really ugly man. I used his description in the first chapter of my story, and then asked myself, what can a writer do with a really, really, ugly man? Well, you either make him into a good guy or a bad guy. I chose a good guy, and he became the first crime-stopper in the story.”

As Gene and Alton travel, they visit college campuses, and that allowed the author to reminisce, to divulge historic gems about each, and to give the reader descriptive tours.

It is perhaps an unusual combination of subjects, those of dark-night-red-neck crime, and academic institutions, but the two are well-blended.

Many of the names and locations come from Garza’s own life. Alton Young, who teaches in the Upward Bound program at the University of Montevallo, is a friend, a Vietnam veteran and a Purple Heart recipient.

Garza holds a Ph.D. in mathematics from the University of Georgia, and he retired from teaching at UM. Along with his wife, Debbie, he has two sons, and a granddaughter for whom he has written a series of children’s stories.

Our author has published a book on Sudoku, and expects to publish “Four Confessions” next year. His books are available on Amazon.com.