Life’s joys are worth the risks 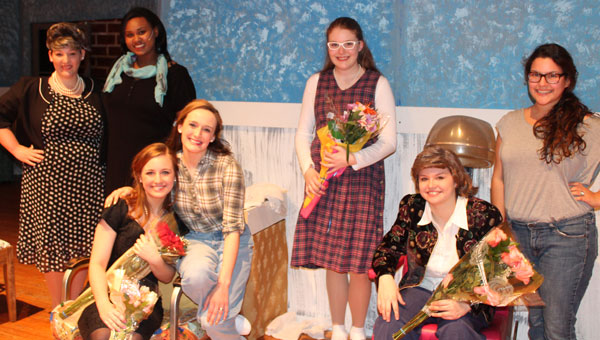 When “Steel Magnolias” premiered in 1989, I was a young bride. Watching the PHS Theatre Department’s production of “Steel Magnolias” last week, directed by PHS junior Hunter Savage, the mother of the bride was closer to my age.

Lydia Cobb as Shelby, the bride and young wife, so intent on defining her own style apart from her mother’s, perfectly captured the spirit of young women seeking their independence.

As Shelby’s mom, M’lynn, PHS senior Emily Jacks was eerily authentic as the mother of a young adult. Amused by her daughter’s choices and assured of her own good judgment in contrast to her daughter’s spontaneous approach, Jacks mirrored the wistfulness of a mother watching her daughter’s life brim with possibilities.

As Truvy, Marissa Williams embodied both Queen Latifah’s warmth in last summer’s remake of the movie and Dolly Parton’s humor from the original “Steel Magnolias.” Blaine Elward’s portrayal of Anelle, along with Maddie Harper and Caylin Cobb as the production’s older women revealed that these talented actresses know a few ladies who grow tomatoes and love football and God. Considering their community, how could they not know such characters?

Strangely, as the Boston Marathon bombings awakened old fears, Shelby’s line, “I would rather have 30 minutes of wonderful, than a lifetime of nothing special,” echoes.

Nancy Carlson is the children’s author who wrote “It’s a Big Beautiful World.” Her book shows a little girl facing her fears of bugs, strangers and stage fright. Carlson unveils a big, beautiful world worth venturing into. The final page reads, “This book was written on September 12th, 2001.”

Both Carlson and Shelby are right. Life’s joys are worth the risks. Violence fuels anger and fear; however, tragedy amplifies if we allow criminals to change who we are.

Theatre teacher Jamie Stephenson said the play reveals that, “If we all work to lift each other up, we can overcome any obstacle.”

Like the persevering characters of “Steel Magnolias,” may each of us find the courage and support to journey into the world in search of the wonder that awaits.