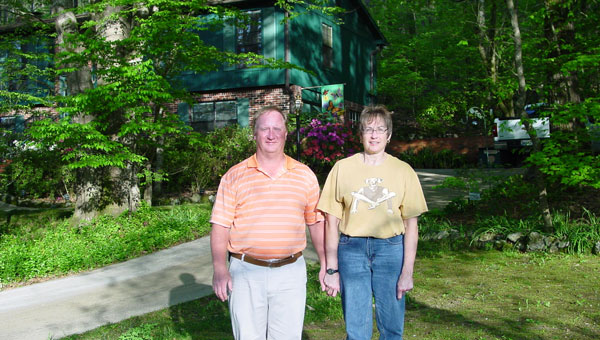 On Monday, April 8, a group of Shelby County Master Gardeners spent their morning carefully making difficult decisions in choosing the most beautiful of the 62 Montevallo yards that had been nominated for beautification awards.

When all of their work was done, first place in the residential category went to Becky and Tom Rogers of 195 Brookhill. Their front yard is attractively filled with colorful annuals and perennials amid attractive natural features.

Runners-up for the award were Michele and David Pawlik, Judy and David Morgan, Pat and Bob Barnes, Carol and John Jones, Sheila and Dennis Russ and Susie and Jerry McGaughy.

The Church of the Holy Comforter took first place in the church category, and the Alabama National Cemetery and the American Village won first and second places respectively in the Schools/Civic Buildings area.

The Business-Cleanliness/Appearance award was taken by Montevallo Dental Office.

The judges gave each yard points from 0 to 10 in each of the categories of curb appearance and creative design; attractive overall appearance; use of natural features, rocks, etc.; trees and woody vegetation; colorful annuals, perennials and yard art. The totals of those points determined the winners.

Readers are encouraged to take a ride around town, enjoy all the beautiful yards, but look especially for the signs noting those that won the awards this year.

The Montevallo Arbor and Beautification Board sponsors the competition each year. The Board is chaired by Herschel Hale, and other board members are Kathy Weese Adams, Bill Legg, Brownye Gillespy, John McKinnon, Kevin Thornthwaite, Billy Tyler, Melinda Nix, and Joan Pickett.

The beautification awards are given in the spring of each year. Forms are available at City Hall and citizens are encouraged to make nominations.

Catherine Legg is a community columnist and can be reached at clegg2@bellsouth.net.