Smoke on the Mountain a hit 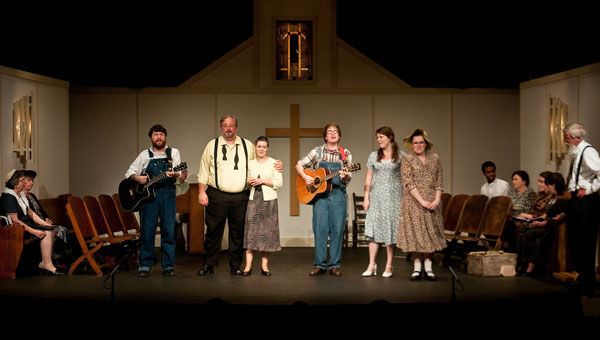 A scene from “Smoke on the Mountain.” (contributed)

The Montevallo Main Street Players have done it again. They’ve produced great family entertainment that everyone seems to enjoy. “Smoke on the Mountain” was a big hit last weekend.

The production is basically a musical with some 30 gospel hymns; most familiar to its audience. The story is about the Singing Sanders Family who are performing in the Mount Pleasant Baptist Church in Mount Pleasant, N.C.

Pastor Oglethorpe has invited them to share their music and their beliefs on a Saturday night in June 1938. Mount Pleasant is located just west of Hickory near the Blue Ridge Mountains.

The audience takes on the role of the church congregation by clapping and singing along with the performers. The entire play is simply charming with its own southern-comical flair.

“‘Smoke on the Mountain’ is a fun way to spend an evening,” said Mary Howard, Montevallo High School teacher and a sometimes-member of the MMSP cast. “The gospel music of the ‘old-timey’ Baptist church took me back to the ‘all day singing and dinner on the ground’ days of my childhood. I especially enjoyed the performances of Mary Kate McLaurine as Denise and Brent Murrill as Stanley.”

Libby Medicus directed the production, and Natalie Dixon was the music director. Steve Gilbert was the producer.

MMSP emphasizes that the public is invited to become a member of their organization, and that they welcome you and invite you to become involved in the productions, both in and offstage.

MMSP is a division of the Montevallo Arts Council.

The next production planned by MMSP is “Picnic,” by William Inge for Aug. 16-18. Please mark your calendar, and for more information go to Montevalloartscouncil.org/mmsp.

School of Technology’s annual car show is May 4