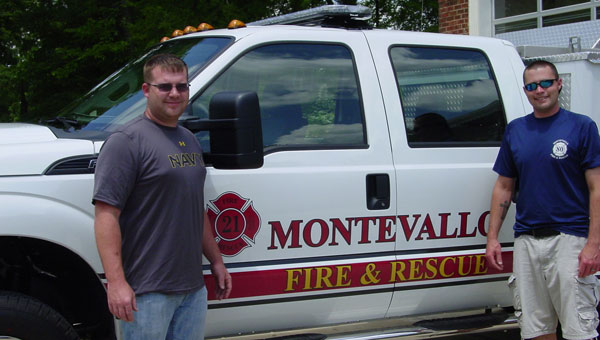 The white streak you glimpse along U.S. 119 may be Montevallo’s new rescue vehicle rushing to help someone in trouble.

Most of us would probably stop and watch to see what direction the truck takes — just to be sure it’s not going to our house.

That’s about all of the thoughts we’d have about the vehicle, or the volunteers — until we need them.

We didn’t know the city paid more than $39,000 for that fully equipped F350 truck, or that the volunteers saved more than $20,000 by doing lots of the modifying of the new vehicle.

Chief Bill Reid commented, “There were no grants involved; we don’t have much luck with grants, but the city is very generous, and always comes up with the money for the equipment we need.”

We didn’t know the 2013 four-man truck replaced a 24-year-old two-man truck that was on the brink of needing sizeable repairs.

We did not know volunteers operate the rescue service; the only exceptions being the two (usually one paramedic and a basic EMT) paid to man the station weekdays during daytime hours.

We did not know the service was initiated in 1980 and is a branch of the Fire & Rescue Services.

Most of these folks have paying jobs in other cities, and volunteer much of their off-time in Montevallo.

And we knew better, but just didn’t remember to let them know how much we appreciate their service and the many sacrifices they make for us. We can do something about that.