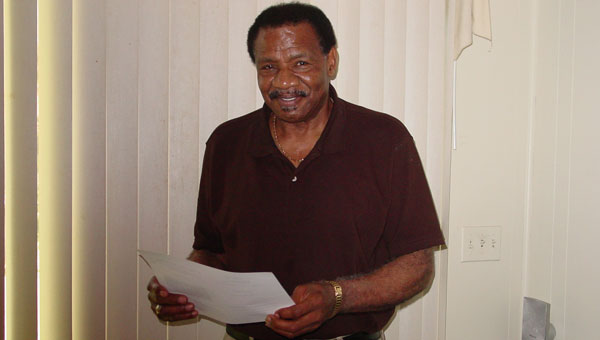 Often there are those who walk among us in Montevallo who are important to us and to our city, but about whom we know very little.

We certainly know Willie Clem Goldsmth as he sits at the table for City Council meetings, or as he walks early every morning in Orr Park, but what else do we know about him?

This writer talked with him on a recent afternoon, and did learn that:

He was born in 1942 in Mobile, grew up in Atmore, and went to elementary and high schools there. He had three sisters, but claims that he was not “spoiled.” He both loved and respected his mother and the stepfather he says was a “very good man.”

Goldsmith went to Daniel Payne College, but after the first year he joined the service, where he served for three years as a sergeant in the artillery division.

On returning from the service our friend took two giant steps: He met and married his much-loved Jessie from Brierfield, and he went back to Daniel Payne where he earned a bachelor’s degree in education. His master’s came from Alabama State University.

He and Jessie were the proud parents of three children, who have grown up to have successful careers of their own. Cynthia is an obstetrician and gynecologist in Anniston; Willie Jr. is the principal at Jones Valley High; and Tiffany teaches at Parker High School. Goldsmith’s children have also taken the time to give him four fine grandchildren.

Jessie brought Goldsmith to Montevallo just after college, and he taught for 29 years in the Bibb County schools: He taught fourth grade at Centreville Elementary and physical education and social studies at Bibb County High.

Our friend is best known in Montevallo as a man who will help his neighbor, a long-time active member of Ward’s AME Church, and as a strong, quiet and influential member of the City Council for more than 30 years.

When asked how he felt about life in Montevallo, Goldsmith admitted,

“I really like Montevallo. It’s a fine place to live with good people, and it’s a great place to raise your children.”