Curiosities on display at Helena Museum 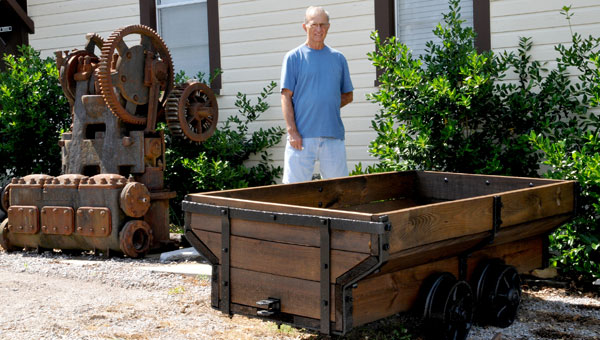 Outside the Ken Penhale Helena Museum, the restored coal car from Eureka No. 4 will be mounted near the Demming water pump, which was salvaged earlier. It pumped water from Buck Creek up to the reservoir for the steam locomotives of Atlanta, Birmingham & Atlantic Railway. (contributed)

Outside the Helena Museum, you may have noticed a restored and refurbished coal cart waiting to be mounted nearby.

Ken Penhale and Brian Wallis came upon the cart frame and parts at the site of the Eureka No. 4 mine entry during excavation prior to the high school

Penhale is closer to completing the downstairs display area that is includes areas containing vintage railroad photos including scenes from the local train crash of 1940. The museum has acquired several railroad tools — an 1880 bridge jack, a spike hammer and a long-spouted oil can used to oil the big wheels on the steam locomotives.

Also on display is a railroad jack, for construction or repairs and a series of large wrenches including switch wrenches and those used on bridge trestles.

Some were dug up where Helena’s original depot once stood. L&N switch lights from Ken’s personal collection will also be on view.

The downstairs floor of the facility still awaits refinishing, which will permit new showcases for artifacts to be placed.

Penhale will also mount an old crank telephone plus a couple of insulators alongside an old photo of the original Telephone Exchange building.

Military history and local veterans photos are hung on the back wall, and the central corridor contains historical photos taken after the tornado of 1933. The museum has acquired a letter that during the tornado was blown seven miles away and afterwards returned to the addressee.

Mining memorabilia and a rake from the Rolling Mill coke ovens adorn one wall and opposite is an old photo of a mine cart in use at Eureka #4 that looks very similar to the rebuilt one.

A 1918 document proclaiming Claude Penhale Fire Boss and signed by Ken’s grandfather, C. I. Hinds, is now framed and hung.

A thank you to Barbara Hyche, who has recently beautified the flowerbed at the museum. She has planted several daylilies including one appropriately named “Forever in Time.”

Laura Brookhart is a community columnist for the city of Helena and can be reached at labro16@yahoo.com.