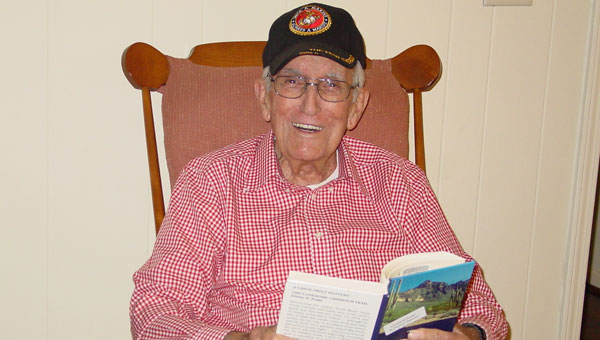 When I met Malcolm McFarland about a month ago, he was working in his yard. When someone told me that he was to celebrate his 90th birthday, I couldn’t believe we were talking about the same man.

McFarland is an active fellow who enjoys life to its fullest. He is an avid reader (Western novels), a dedicated “church-goer,” tends to the small repair jobs in the house and yard, and loves playing games with his grandchildren. In addition, he remains a threat to a roaming deer.

As he told us about the deer hunting, his wife, Gloria, laughingly commented that she brought in the only antlers on their wall, and that she is able to keep Malcolm in line because he knows she’s a “good shot.”

When asked to what he attributes his long and healthy life, McFarland became serious and pointed to Gloria. “She takes such good care of me,” he said. “My daughters say that she waits on me hand and foot.”

McFarland, the oldest of three children, grew up in Birmingham where he graduated from Phillips High School.

He joined the Marines, served from 1943–1946 as a private first class in the 2nd Marine Division, 2nd Combat Engineer Battalion. He served in the Asiatic Pacific Theater almost two years, and was in Nagasaki shortly after the atom bomb was dropped in 1945. He explained he seemed to suffer no ill effects from the catastrophe, but they were not allowed to eat any food grown there.

Not long after his discharge, a cousin introduced him to his bride-to-be, Gloria, and they have enjoyed 67 years together. They have two daughters, Marjorie Draper, and Judy Nuss.

McFarland spent 35 years as a Birmingham fireman and the next 20 working on their small farm in Blount County with holidays at a cabin he built in the mountains.

When the time came for retirement they chose Montevallo, and we’re glad they did.

The family invites all their friends to join in celebrating McFarland’s birthday on Saturday, June 15, between 2 and 4 p.m. at the Aldrich Baptist Church.