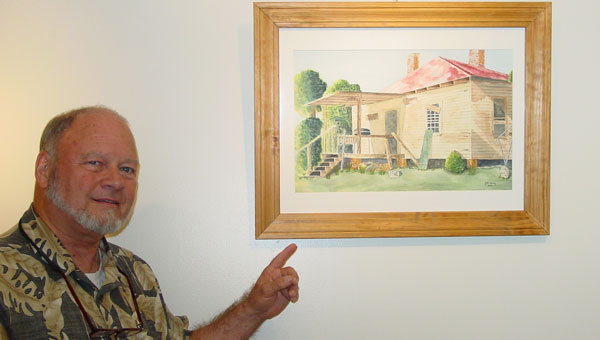 Artist, the Rev. John Wesley, talks about his paintings. (contributed)

Many of you readers may be familiar with the Rev. John Wesley’s beautiful watercolors, but if not, you are in luck. His works are on display in the Parnell Memorial Library Art Gallery for the entire months of July and August. There will be a gallery talk and reception on Sunday, July 14, at 3 p.m. and you are invited.

The paintings cover a wide range of subjects from the ordinary to the unusual with the inspiration for most found in the artist’s travels.

Wesley serves St. Andrews Episcopal Church in Montevallo, and also teaches classes at the University of Montevallo. It would seem that there is little time left for art, but he explained that some years ago he felt the need to do something creative.

“I tried poetry,” he said. “It did not fit. I tried pottery, not enough patience; painting in oil, just not yet the thing.”

Then he heard of a short class in watercolors… surprise! He loved it, and it fulfilled his need for creativity, and for relaxation.

On a recent afternoon Wesley walked around the gallery talking about each of the paintings explaining why he chose that subject and the story of each.

“Georgia House” is a rather pitiful little tin-roofed house with one window boarded up, a grill and old chair on the porch. Wesley admitted that scene spoke to him because even in those squalid conditions, the people who lived there struggled to get by, using whatever they have or could find; they still sought beauty evidenced by the many flowers blooming in the yard.

Another painting, “Simply Living,” is of a couple of occupied shacks within feet of a rail track in Bellaire, Ohio. The movie, “Unstoppable,” with Denzel Washington, was filmed there; the shacks were purchased and demolished as a train crashed into them.

Those two were perhaps more meaningful than pretty, but there are many really beautiful in the exhibit: “Little Lagoon Sunset” is a stunning Gulf Shores scene; “Pink Dogwood” a gorgeous painting of St. Andrews; “Swift Cole Mansion” in Bon Secour, another stunning painting.