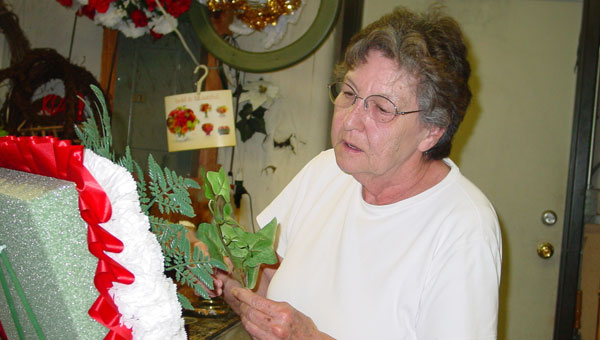 Elizabeth Studdard works on a funeral arrangement in her shop on Island Street. (contributed)

Recently I spent an enjoyable afternoon visiting with one of Montevallo’s strong business women, Elizabeth Studdard, at The Flower Shop in Montevallo. She was working on arrangements for two funerals, so as she took a short break we talked about her life as a florist.

As Elizabeth jokingly expressed it, “I didn’t go far in life; grew up in the house here next door to the shop; and still live in my home right here in Montevallo.”

She was born the middle child of the eight Norris children. Her father was a well known and respected builder who built City Hall, the Alabama Coach bus station (recently demolished), and many, many of the other buildings and houses in Montevallo including Elizabeth’s home. Her mother, for many years, operated the Coed Café in the bus station.

Elizabeth attended the Montevallo schools and Alabama College. She remembers a happy childhood: elementary school in the Jeter Building, Principal, Charlotte Peterson, with 00the wonderful stories she told. She remembers summers swimming in the creek with Coach Theron Fisher watching over them, sliding down the spillway on a cafeteria tray at the college lake, and slipping in to slide down the fire escapes in Main Dorm.

Shortly after high school, Elizabeth and Bob Studdard married in the Methodist Church. Bob worked for Alabama Power in Wilsonville. Their union was blessed with three sons: Scott, Keith, and Barry, who gave them four grandchildren to love and enjoy. All three sons and their families live in the Montevallo area.

A life-long career as a florist began for Elizabeth shortly after high school as she worked in Neva Logan’s Brierfield shop; and then for Beth Rockco here in town. Elizabeth built her own shop in 1991 and except for a period of time, when the business was operated by William Grady and then by Alisha Oswald Reedy, Elizabeth has been there creating the beautiful arrangements that she is known for.

We talked about the changes in the business and the changes in Montevallo. She expressed a deep love for both, but with concern that there is still much to do.