Where Is That, Number Two 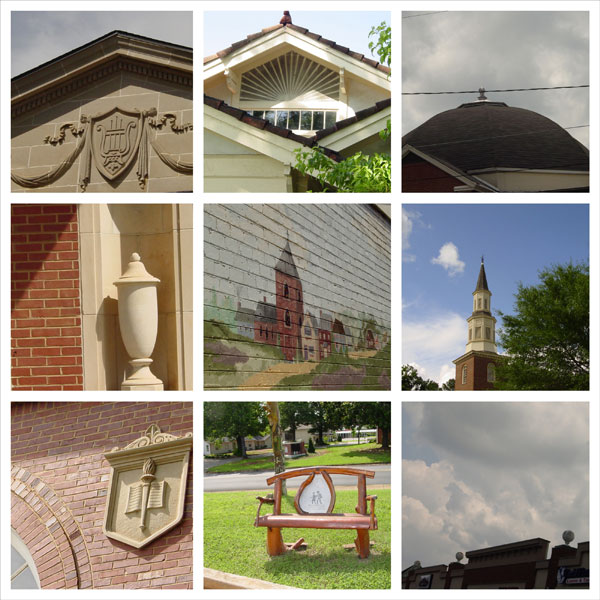 Can you guess the location of these Montevallo camera shots? (contributed)

Was the June 26th quiz as much fun for you to solve as it was for me to write? If one or two of the answers stumped you, you’ll fine them at the end of this article.

Now, for the next puzzle that I promised you may find this a little more challenging, but believe me, they’re here in Montevallo and with these clues you should be able to locate them.

The hints apply to the pictures from the left by rows.

Top row: (1) Major stage productions have been held here for many, many years. (2) This house was built in 1920 by the owner of the first Coca-Cola plant and is thought to be the first home in Montevallo that was air-conditioned. (3) If you don’t know this, cast your eyes heavenward the next time you visit with Walt Czeskleba.

Middle row: (1) In 1938 or ’39 a fire destroyed the building that this structure replaced. (2) A popular little English lady inspired the painting of this mural. (3) A 1999 addition to Montevallo that is a source of pride and increased economy.

Bottom row: (1): This building is named for a former University of Montevallo business manager. (2) Bobby Jones created the bench, and it sits in front of a popular gathering spot. (3) You should be familiar with this sky view, so you get no other clue.

How did you do?

The solutions to the June 23rd (online), June 26th (print) quiz follows. If you’d like to see the picture or story again, go online to: Shelbycountyreporter.com/2013/06/24/where-is-that/