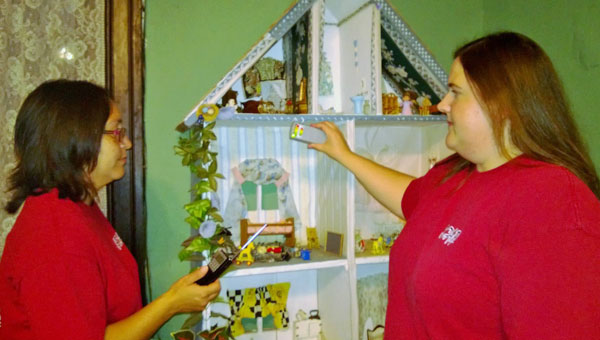 The doll house photo is Kim Johnston, founder of SCARE, on the right with K2 meter, and Nicole Sparks on the left with a Spirit Box in the Farrington Hall library. (contributed)

Reports of soft voices in the night, the opening and closing of doors, strange aromas, and spooky moving shadows in Farrington Hall finally became too much for owners Henry and Rose Emfinger, so when the founder of Spirit Communications and Research of Alabama, Kim Johnston, asked to visit, they quickly agreed.

SCARE members came in on a Saturday night with their Spirit Box; a modified radio. The theory is that spirits can use the white noise generated by the Spirit Box to speak. The team also had night vision and full spectrum video cameras, and voice recorders. Everything they do is recorded and reviewed for unexplained voices. The team members explained that they ask the spirits questions and wait for responses or sometimes-unrelated comments.

Is Farrington Hall really haunted? Johnston’s answer was a resounding “yes.” She said, “We haven’t fully reviewed our evidence yet, but we did hear responses when we asked questions as soon as we turned on the Spirit Box. We asked for names and one response was Bud or Buzz and another was Kenneth. We asked what kind of work they did and we heard the word ‘coal’ immediately. We ask one of them to light up our K2 meter and the lights immediately went off followed by a voice that said ‘there.’“

SCARE, is often called in to help families who believe their homes are haunted. Johnston told of an experience in Pell City that involved a ghost that kept knocking paintings off the walls or tuning them upside down, opening cabinet doors, and locking a four-year-old in his bedroom. The family was seeing dark shadows and hearing a man whisper, “hey, come here little boy.” They were very worried, but SCARE came in and member Blain Rohan sent the mischievous spirit on his way.

OK, readers, you may be skeptical… but just give Emfinger (205-665-2886) a call, and make an evening visit to Farrington Hall at Aldrich Coal Mine Museum. That experience just might challenge your thinking.

Johnston’s new book, “Haunted Shelby County” is available at Amazon.com, and she co-hosts “The Scare Show” on ZTalkRadio.com and Digital Radio 103.

Catherine Legg can be reached by email at clegg2@bellsouth.nte.