Swimming in Shoal Creek a tradition for Montevallo kids 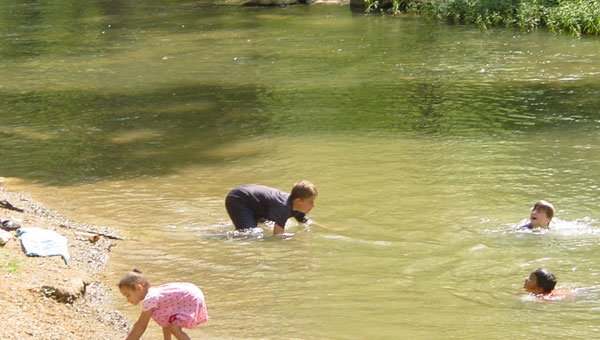 Most any day you visit Orr Park you’ll find kids wading or swimming in the cold water of Shoal Creek just as they have for more than 85 years.

J.A. Brown, who grew up in Montevallo, likes to tell that, as an eight-year-old, a bunch of friends and he would slip off and go skinny-dipping at John Dock, their favorite swimming hole. (John Dock was located maybe 300 feet above the current wide walking bridge.)

Brown tells a little of the name and history of John Dock. It seems that in the late 1800s and early 1900s, for a number of years, a fellow whose name was John Dock had a gristmill (one of three in Montevallo) on that site. Below the mill dam was the place to wash a Model T if you were lucky enough to have one.

“In order to get to John Dock to swim,” Brown said, “we had to go through Mr. Mulkey’s sugarcane field, and because the old man knew that we would snitch some of the sweet cane, he would take out after us with his shotgun. Well, we knew it was only filled with peas, so it didn’t stop us, but we were surprised when the peas caught my buddy, Walter Weems, in the rear end; he cried, we laughed, and forever called him ‘Crip’ Weems.”

The John Dock swimming hole was perhaps 30 feet wide and only five or six feet deep, so it was assumed pretty safe for older children, but it lost popularity in the late 1940s when two young boys drowned there.

To provide a place for children to swim in the 1950s, the City built those steps down to the creek (in front of the gazebo) and for many years Coach Theron Fisher supervised the kids swimming there. He was coach, lifeguard, and fight-breaker for all the town’s kids.

That program ended, too, due to economics or water quality, so we jump to today and we find the town’s children, unattended or watched over by their parents, still enjoying splashing in the cool water of beautiful Shoal Creek.