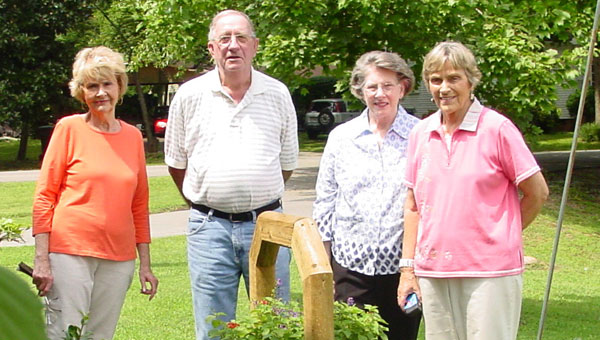 Ask any member of the Montevallo Civitan Club for the names of their strong members, and Don Whitten’s name will certainly be in their response.

Don joined the club 10 years ago, and he’s been hard at work ever since.

“He is an extremely active Civitan member,” said Co-President Hilda Hicks. “When he takes on a job, you can mark it ‘done’ because he’s so knowledgeable and dependable. It’s just a joy to work with Don.”

To justify her statement, Hilda explained that recently the club wanted to donate a planter to the Senior Center; Don took on the project within a blink of an eye. He had seen a planter (a large wooden basket made of landscape timbers) that he liked while on a visit to his sister in Daphne.

The plan was a tedious one calling for precise measurements. Don’s friend, Dr. Bill Jones, retired UM Physics Professor, helped out there. The construction of the unusual planter was labor intensive, but after many, many hours of Don’s work, it was completed.

Cedar Creek Nursery donated the plants, and the beautiful new planter is already installed next to the screened porch at the Senior Center.

A Shelby County native, Don grew up in Wilsonville and graduated from Columbiana High School. His career took him from McDow Motor Co. to the Army (serving in Germany), the Agriculture Stabilization Service, Lonnie Russell Farm, Seaman Timber Co. and to the Montevallo Water Department where he retired after serving as manager for almost 27 years.

Along the way Don married Emma, and they had twin sons, Mike and Tommy, who have given them seven wonderful grandchildren and one great-grandchild.

Today Don is a happy retiree spending time with family, working in his wood-working shop, enjoying his church (Montevallo Methodist) life, and volunteering with the Civitan Club.