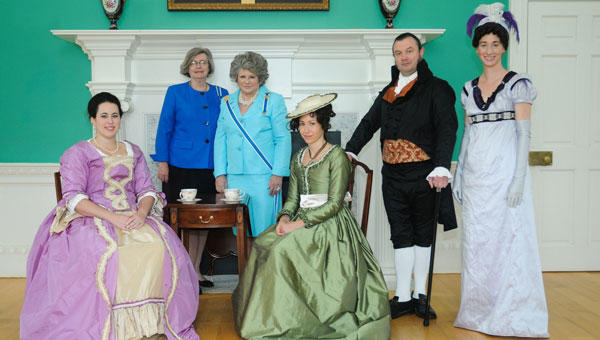 DAR Representatives Nancy Folk and Connie Grund with American Village interpretive staff in new costumes made possible through a grant from DAR. (contributed)

The American Village was recently notified it would receive a $7,500 grant from the National Society Daughters of the American Revolution (DAR) as a part of a nationwide DAR program that funds programs that support their mission areas of historic preservation, education and patriotism.

Nancy Moore, a member of the Cahawba Chapter, and the Historic Costume Manager at the Village, is especially excited about the grant for it will be used to purchase new costumes for ten interpretive staff members in the American Village’s American Presidency school program. Newly clad will be the interpreters for George Washington, John and Abigail Adams, Thomas Jefferson, Alexander & Eliza Hamilton, Henry and Lucy Knox, Dolley Madison, and Mary Livingston Duane.

There will be new ball gowns for the ladies and dress coats and knee-britches for the men including a new suit for George Washington to wear for his 1789 inauguration. Moore and other American Village staff members make all of the costumes used there except for the shoes, jewelry, and accessories.

Moore portrays Dolley Madison in the American Presidency program. She explained that she enjoys that role because Dolley Madison was such an important lady at a time when women’s opportunities were very limited.

“In my job at the American Village,” said Moore, “it is very satisfying to research, design, and create the beautiful gowns and suits worn in the Federalist period, a fashion span of 30 years; and I am so pleased that my DAR Chapter saw fit to sponsor this project.”

School students and other visitors to the Village learn some of the history of the presidency by the presentation of six historical vignettes. Washington’s inaugural address and the celebration of his inauguration are highlights of that program.

The American Village was founded in 1995 with its mission being to educate and inspire young people to know American History, to cherish the ideals of liberty, and to serve our country as good citizens and leaders.