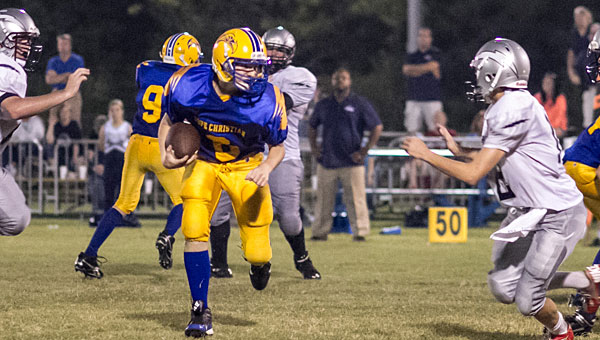 “We substituted pretty heavily throughout the game,” said HCS head coach Tony Nafe. “We got a chance to look at some of our young players.”

Hope recorded five touchdowns in the first quarter: One on a 20-yard pass from Allen to Cannon Fuqua, one on a Ben Friedlander 70-yard run, one on a Nick Ray 34-yard run and two on Cameron Barnett interception returns.

In the second quarter, Allen added touchdowns on a 51-yard run and on a 75-yard interception return. Fuqua also scored on a seven-yard run.

“He really stepped it up tonight,” Nafe said of Nabors, who also plays on the defensive line. “I was amazed at his ability to read holes and adjust.”

Pelham’s Moregan Sharp carries the ball for a first down during the Panthers’ 28-0 season-opening victory over the visiting Paul... read more