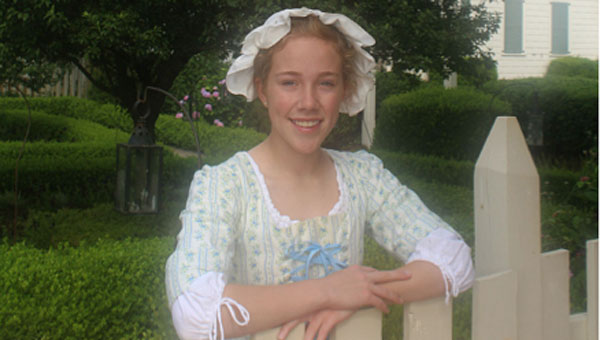 American Village selects 25 students each year to participate in summer programming. The students must be in sixth-12th grade and should be interested in history and fine arts performance. Students receive professional training and must purchase their own 18th century costume. (contributed)

The Junior Interpreter Program at the American Village is very popular. Each year 25 students in grades 6 through 12 actively take part in the summer programming. The students receive professional training and conduct tours or colonial games, and may participate in the various historical vignettes.

Noah Houston of Alabaster explained that when he heard about the program he was already a history buff and had done some acting, so he was very interested.

He had visited the Village several times and was especially impressed with the vignette about the pilgrims coming over on the Mayflower. It was so real to him, he confessed, that the simulated rocking of the boat made him sick.

Noah explained that being a junior interpreter is about teamwork. You are out among the public where you must rely on your fellow interpreters and think on your feet so you don’t get “out of character.”

He is excited that this past summer he got to be a drummer in the militia; he was shot (by his favorite interpreter, Chris (Long) three times a day; and he also played the son of the jailer in Williamsburg,

Another participant was Elise Helton of Alabaster; She explained that she auditioned because Noah is a friend and his enthusiasm was contagious. She had also remembered seeing girls at the July 4th celebration wearing beautiful colonial dresses,

“As an interpreter we do a lot of improvisations,” she said. “In one of the vignettes I play a young woman in Colonial America, and at that moment I AM Charlotte Johnson of Boston, not Elise Helton of Alabaster.”

Both of these young interpreters had good advice for getting the most of a visit to the American Village. Noah said, “Put yourself in their shoes. Don’t just sit back and take your liberties for granted. What can YOU do?”

Elise advised, “Let yourself be pulled in. Try to focus on the characters and what they’re struggling with, and ask yourself what you can do to emulate their good character.”

* The students must be in sixth-12th grade and should be interested in history and fine arts performance.

*The students receive professional training and must purchase their own 18th century costume.