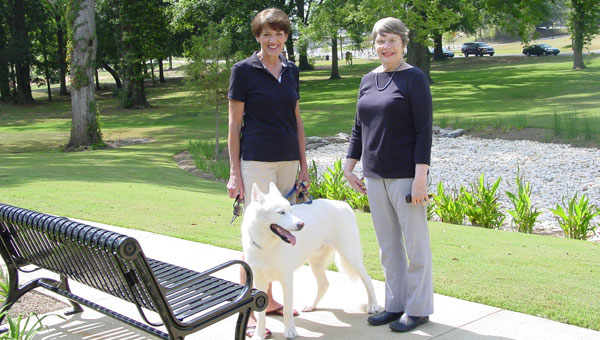 Co-chairs of the steering committee for the new Library Learning Enrichment Garden, Michele Pawlik and Libbie Rodgers along with “Cody” (Michele’s walking buddy), look over the beautiful garden. (contributed)

Visitors were introduced to the rainwater harvesting system that collects rainwater from the library roof, stores it in two underground 1,700-gallon tanks, and reuses it to irrigate the garden; thereby conserving water and creating a monetary saving.

The tour also highlighted the Rasmusson Bioswale with its state-of-the-art storm water management process, the Freeman Garden at the library entrance, the Kelly Garden overlooking the Bioswale, and the Brown Garden behind the Parkside Terrace.

Project leaders explained that the garden affords educational opportunities for all ages. They learn how the project is reducing siltation that degrades Shoal Creek and the Cahaba River, and they will see that the garden changes day to day and learn the names of the plants, many native to this region.

UM students will monitor rainfall and the rainwater used for irrigation, and will test water quality in Shoal Creek. Finally, the garden will model practices that promote sustainable gardening and low impact development.

Appreciation was given Shelby County, and the City of Montevallo who both provided in-kind services for the project; and to major donors: The Coca-Cola Company & World Wildlife Fund Southeast Rivers and Streams Partnership; The Daniel Foundation of Alabama; the Mike and Gillian Goodrich Foundation; and Cawaco Resource Conservation and Development Council, Inc.

Other recognized donors were: Ethel Elise Rasmusson, Ann K. Kelly & family, J. A. and Eleanor Brown, and friends of “Buddy” and Barbara Freeman.

More information can be found at ParnellMemorialLibraryFoundation.org.