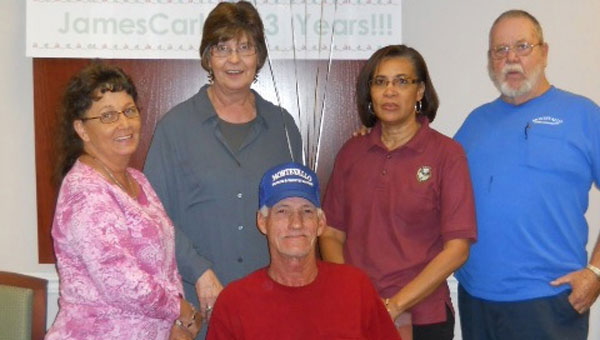 Not many people stay with the same employer for their entire career, but James Carlee really did that. He has just retired from the Montevallo Water Department after 43 years of faithful service.

Carlee is a refreshing spirit in many ways. He has only good things to say about Montevallo, his job and the folks he worked with during all of those years.

“Outside my family, Montevallo is my passion, I love this town, and I think we have a golden future,” he said. “I’ve seen lots of changes in those 43 years. When I started work in 1970, the water department was operated by the city; all of the departments shared workers, so we took care of water, gas, the parks, the cemetery and all other areas of the city.

“We did most things by hand using hand tools … no riding mowers or modern equipment,” he added. “Now operations are separated and the work is easier with up-to-date equipment.”

“James has always been an exceptionally dedicated employee,” Whitten said. “He was there every day; if he did call in sick, you knew he was very sick. He was always willing to come in to work … no matter whether it was Thanksgiving, Christmas, midnight or two in the morning.”

Harmon, who is the current water department manager, had this to say, “James Carlee has served the citizens, City, and the Water Board for 43 years. He invested his heart into his work. He was always willing to do whatever was asked of him. His knowledge and skill are irreplaceable”.

Carlee, and his wife, Nancy, have been married for 43 years, and they have two children, Robert Carlee and Loretta Kornegay, and grandchildren Haley, Lane, Lindsey and Landon.

Fishing on the Cahaba River or the college lake, deer hunting and spending time with those grandchildren are Carlee’s major retirement plans.