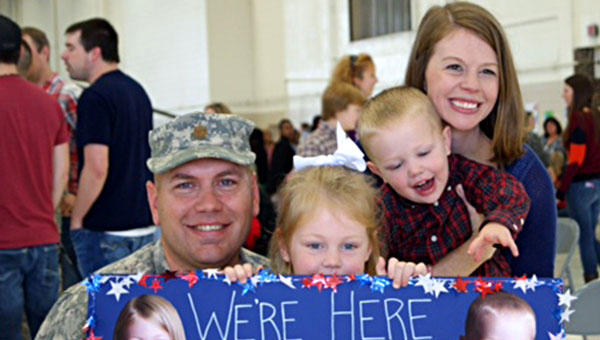 “We’re Here to get Our Daddy” read the sign Laura Griffin and her children Abby and Carter made for husband and father Mac Griffin, who returned after 11 months from deployment in Kuwait. (Contributed)

This time last year, Mac and Laura Childs Griffin were keeping their faith strong and their minds positive, but facing together the reality of his yearlong deployment to Camp Airfjan, Kuwait on Jan. 13.

The Griffins, now parents of daughter Abby, 5, and son, Carter, 2-and-a-half, have been married eight years. Though Mac served in Iraq earlier when he and Laura had been dating about a year, this was a first since becoming a family.

After receiving an ROTC scholarship to college, Mac has been a part of some eight different units, and is now a member of Unit 135th ESC (Expeditionary Sustainment Command).

“Our house felt empty,” Laura said, “but my plan was to keep myself very busy and continue working. I joined a gym with childcare to have some time to stay fit and re-energize after work. And in the beginning, we had many invitations from family and friends to visit.”

“Naturally, the children were sometimes weepy, but we were fortunate to have access to iPhone facetime. It was a lifesaver for us. Talking with their dad helped to calm them down,” Laura said.

“They say when the spouse moves out, Murphy (Murphy’s law) moves in,” Mac said.

In the first six weeks, Laura had to deal with a heat unit quitting in cold weather and a roof leak that flooded their downstairs, requiring replacing most of that area.

“When I deployed before to Iraq, I was company commander of about 120 guys and they just wore me out,” Mac said.

“This deployment aged Laura,” he added. “I think she had it worse! Ages 2 and 5 are relentless.”

Laura created a visual tool for the children by filling a canister with plastic Army men. Each day, the trio moved a man into a canister that began empty.

“Finally we got to the point where Abby handled it so well,” Laura said. “She would just tell everyone, ‘Well Daddy had to fly over the big ocean and he’ll be back by Christmas.’”

Mac returned earlier than expected, on Nov. 17, which was exciting for his loved ones.

“This year gave me a new respect for single parents,’ Laura noted.

“The night he got home was surreal. I just stood there staring at the real him. We’re so thankful to have had a safe deployment,” she said.