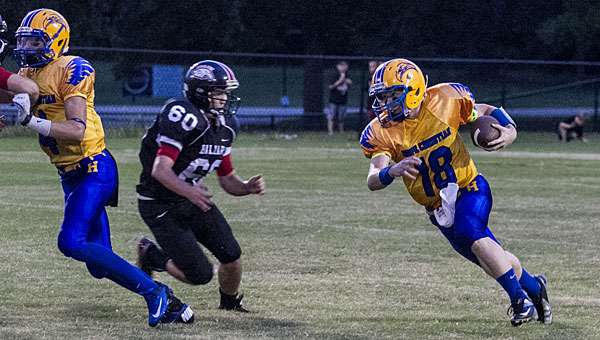 Hope Christian head coach Tony Nafe said he is expecting seniors like Reid Allen (No. 18) to lead the charge for the Eagles in 2014. (FILE)

PELHAM — Hope Christian head football coach Tony Nafe is first to admit that the 2013 season didn’t end at all like the Eagles hoped.

After opening the season 8-0, the Eagles looked to have sealed a win over archrival Evangel Christian in Alabaster to take the ACSC title. Then, up 20-9 with just six minutes left, disaster struck. The Lightning scored three times to stun the Eagles 29-20.

“It was the most disappointing loss since I’ve been there,” Nafe said. “I take the hit on that. Truthfully, I made a couple of bad calls.”

The loss took a toll on the squad, as a close loss to The Webb School and another to Tri-Cities ended Hope’s NACA tournament, closing the season with three straight losses.

It a bitter pill to swallow, Nafe said, and the team decided a new attitude built upon the heartbreak was in order.

“When we lost, they decided that day ‘We are not doing this again,’” he said. “When they showed up (for spring training), I told them ‘Commit or quit.’ It lit a fire under them.”

Nafe said the team responded to the challenge.

“Everyone came into spring training in probably better shape than (they came into) fall last year,” he said. “Everyone healed up. I’ve got guys that put on 25-40 pounds (of muscle) and grown almost three inches.”

One of the things that helped carry the team during spring training was a combination of senior leadership and lack of injuries, Nafe said.

“Last year, coming out of spring we had three major injuries,” he said. “(This year) we came out with no major injuries. Zach Gramstad is probably a better coach than I am. He came to me and said ‘I want to play offense too.’ I’m so impressed with him. Reid Allen has probably picked up three-tenths of a second. Our offense just clicked.”

That said, Nafe said the Eagles needed to get some younger players experience — and in a hurry.

“On the offensive line, we have a couple of sophomores and freshmen that will see time,” he said. “Their lack of experience is something we’ll have to overcome.”

With that in mind, Nafe said he’s confident in his squad.

“They saw how close we were to going all the way last year,” he said. “It left a bitter taste in their mouths.”
The Eagles kick off their season on the road at South Haven Christian in Springfield, Tenn., Aug. 15

Sports can bring out the best in us, too [COLUMN]

This is the kind of joy I see at every event I go to in Shelby County. Sure, there are... read more