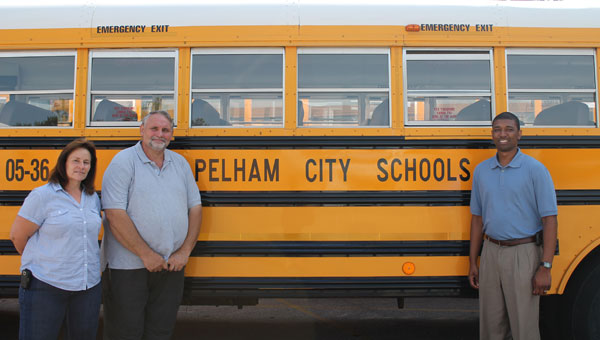 As the school system began its second official day, Collins’ plans for transporting students are well under way—beginning with insuring that Pelham’s bus drivers are ready.

“Initially, Pelham City Schools will run a fleet of 35 buses,” said Collins, who served previously as a Pelham High School assistant principal. Collins, who was in charge of buses at PHS, became a licensed school bus driver in 2006. A very detail-oriented professional, Collins is perfectly suited to handle the intricacies of insuring that the city’s children are transported safely.

All school bus drivers go through an extensive training and certification process requiring both written tests, driving tests and an oral pre-trip checklist test. School bus drivers must have a commercial driver’s license with passenger and school bus endorsements. They must also pass a knowledge test.

Pelham is fortunate to have two very experienced and qualified trainers. Dunaway has been driving Pelham school and church buses for many years. In June, Kendrick, a bus driver for 23 years, won the title of state champion of the Alabama School Transportation Association School Bus Safety Road-E-O.

“Pelham’s buses will continue to run the same routes as last year. There have been revisions to a few of the routes,” said Collins. “Any changes were based upon the recommendations of the drivers.”

Parents can easily check for bus numbers, times and any route adjustments soon.

“Bus information will be posted on the Pelham City Schools website’s transportation section by the latter half of July,” said Collins.

Most of the drivers’ positions are filled; however, three bus drivers are still needed along with more substitute drivers. Contact fcollins@pelhamcityschools.org for more information.

With Collins supervising transportation, Pelham City Schools will be ready to roll on Aug. 7.

Ken Holler, Bob Cupp and Bobby Hayes were there at the beginning of Pelham’s Ballantrae Golf Club. (Contributed) By CONNIE... read more