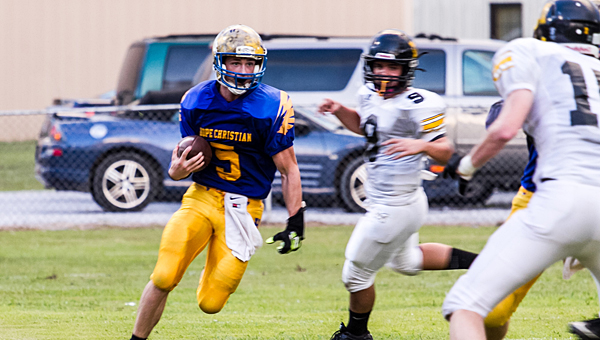 “He was one of the main leaders of the group,” Nafe said of Allen. “But our team rose to the occasion. Everybody played phenomenally well tonight for Hope.”

The Eagles took down the visiting Meadowview Christian Trojans 55-14 en route to a 2-0 start to the 2014 season.

Hope recorded 430 total yards of offense fueled by quarterbacks Cannon Fuqua and Dillon Thompson, who served in a dual role throughout the game.

Hope will face North River Christian in Alabaster on Aug. 29.

Pelham gears up for season in jamboree

Pelham’s Jeremiah Spillers (50) and Chase Shearer (10) take down a Pleasant Grove running back during the teams’ jamboree game... read more