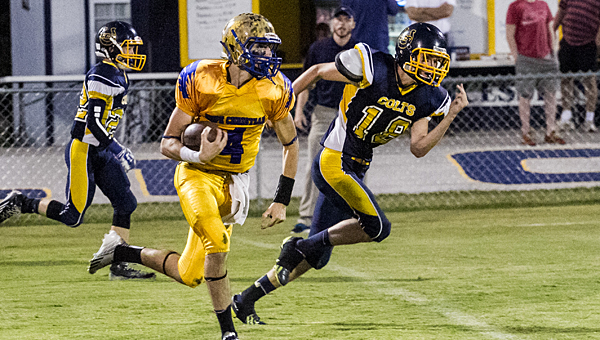 Cannon Fuqua runs the opening kick off back for a touchdown during the Eagles’ Sept. 19 game against Christian Community. (Contributed/Twanna Arnold)

The Christian Community Colts used a furious fourth-quarter comeback to take down the Hope Christian Eagles 69-67 in a road game in White House, Tenn., on Sept. 19.

Hope head coach Tony Nafe said turnovers plagued the injury-riddled team, allowing the Colts to overcome a 61-35 hole entering the fourth quarter. The Colts scored a touchdown with less than a second left in the game to take the victory.

“No excuses, but we’re just so banged up. We had too many turnovers,” Nafe said. “It’s up to us to be the better team. I put the blame squarely on my shoulders. The guys played their hearts out.”

Hope finished the night with a total of 240 rushing yards and 240 passing yards.

The Eagles return home to face Evangel Family Christian Academy of Montgomery on Sept. 26 at Buck Creek Park in Alabaster.