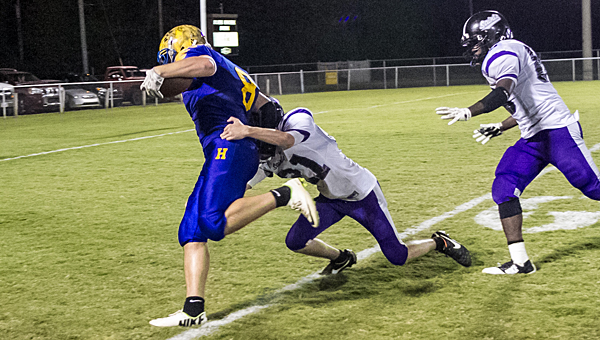 Hope’s Cameron Barnett, left, on one of his touchdown runs late in the third quarter during the Eagles’ Sept. 26 win over Evangel Family. (Contributed/Twanna Arnold)

ALABASTER – Hope Christian School got a chance to tune up for its biggest rivalry game of the year on Sept. 26, taking down the visiting Evangel Family Christian Saints 77-52.

“I’m pleasantly surprised every week. We find we’ve got guys who can step up each and every week,” HCS head coach Tony Nafe said. “We’ve got a great team. I won’t make any prediction for next week’s game (against Evangel Christian), but we will be ready for it.”

Hope ended the night with 502 total yards of offense – 344 of which came on the ground – and benched many of its starters for most of the game. Cameron Barnett recorded 101 rushing yards and 126 passing yards in the win, and Cannon Fuqua had 32 passing yards, 50 receiving yards and 80 passing yards.

Defensive leaders for the Eagles were Micah Douglas, who had nine tackles and two fumble recoveries, Stephen Eddings, who had seven tackles, and Chase Washburn, who had six tackles.

Fuqua recorded two touchdowns and Juan Cuellar recorded one touchdown in the first quarter. In the second quarter, Fuqua connected with Dillon Thompson for a touchdown, and Nick Ray Stephen Eddings each added a touchdown on the ground.

Barnett added three touchdowns in the second half, and Ray, Fuqua, Thompson and Cuellar each added one.

Hope will face Evangel Christian in the Sky Bowl on Oct. 3 in Alabaster.