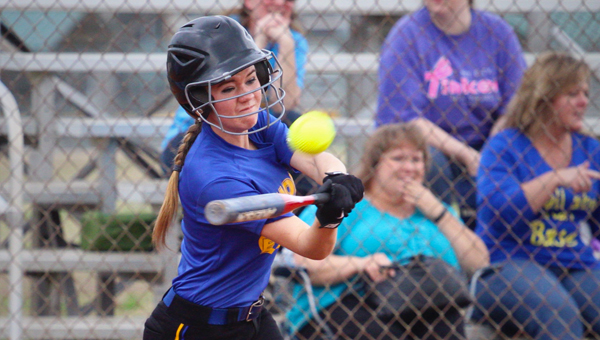 Kathleen Clark of Hope Christian School smacks a double during a March 12 doubleheader with Ezekiel. (Contributed)

MONTGOMERY – The Hope Christian School Lady Eagles traveled to Montgomery on March 12 to take on Ezekiel Academy in a softball doubleheader. The Lady Eagles held on to win the first game in a tight contest by a score of 11-9 before getting beaten soundly in the second game 22-2.

Macheala Powell took the mound to start the first game for Hope Christian and pitched five marathon innings, throwing a remarkable 117 innings during her stint on the mound, averaging just over 23 pitches per inning. She only gave up three hits and two runs during her five innings on her way to striking out eight. Erin Preskih would take over pitching duties for the last two innings of the contest and would give up seven runs in the seventh inning, but Hope would hold on to win the game behind their offensive output.

Hope put the most distance between themselves and Ezekiel in the second inning, when the Lady Eagle bats erupted for eight runs. Ellaina Walker, Amanda Rowley, Jessica Rowley and Sarah Birdsong all got hits in the inning. Walker singled twice in the inning and Amanda Rowley went for a single and a double in the inning on the way to scoring the eight runs. A number of errors and walks by the Ezekiel pitching and fielding staff also helped Hope Christian in their second inning barrage. They would add two more runs in the top of the third, which when combined with the eight-run second inning and one-run first inning gave the Lady Eagles an 11-0 advantage. They would need every one of those early runs, as Ezekiel mounted a furious seventh-inning comeback, but fell short and gave Hope Christian the 11-9 win.

The second game started out as a close contest, with Ezekiel leading 4-1 after the third inning. In the fourth inning, Hope Christian hung one run on the scoreboard to pull the score to 4-2 before Ezekiel went to the plate in the bottom of the inning. The bats for Ezekiel exploded for 18 runs in the bottom of the fourth inning, and the game was called with the score 22-2, and the Lady Eagles left Montgomery with a 1-1 draw on the day.

The Indian Springs School’s boys soccer team won the 2014 AHSAA 1-4A State Championship and is looking to repeat the... read more