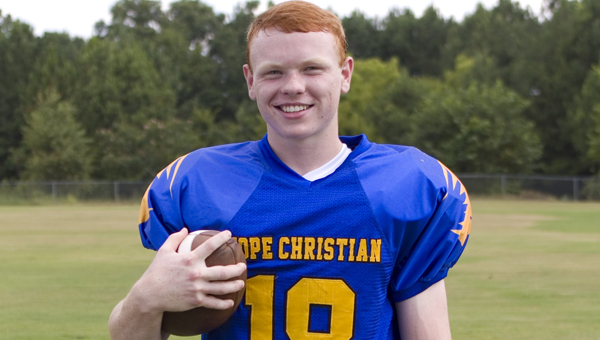 Hope Christian’s Reid Allen will suite up for Mississippi College in Jackson, Miss. next year as a quarterback. Allen rushed for over 1,000 yards and threw for over 2,000 in his junior season before tearing his ACL in his senior campaign. (Contributed)

PELHAM – Hope Christian School’s Dillon Thompson and Reid Allen will continue their football careers at the college level after making the decision to take their talents to Belhaven University and Mississippi College, respectively. 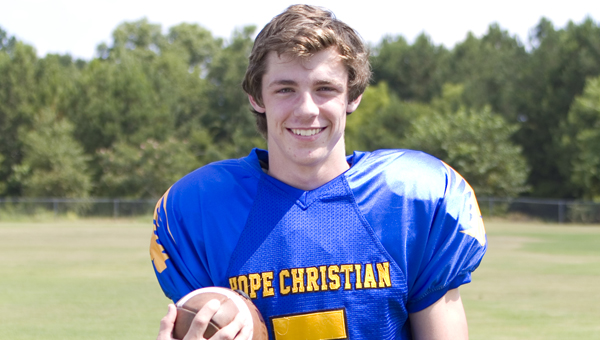 Dillon Thompson of Hope Christian will attend Belhaven University in Jackson, Miss. where he will play wide receiver. (Contributed)

Both Thompson and Allen were major contributors to the Eagles program during their time on the field, and both faced their fair share of adversity in the 2014 season. Hope Christian head coach Tony Nafe raved about both players in an April 8 phone interview, and talked about the kind of young men they have become.

“Both of these kids are tremendous young men,” Nafe said. “They both have high moral values and very high character.”

On top of being upstanding young men, both are very capable ball players who will contribute at the next level, according to Nafe.

Allen, who will attend Mississippi College as a quarterback, received his opportunity to play in college based completely off of his production as a junior, because in the first game of his senior campaign he went down with a torn ACL. The fact he still was able to garner a chance to play at the collegiate level is a testament to the ability and athleticism he showed in his junior season, said Nafe.

Thompson, who will play wide receiver at Belhaven University, is another prodigious talent, according to Nafe. “Dillon is one of the most gifted receivers I’ve ever seen,” Nafe said. “He runs right in the 4.5 (second) forty (yard dash) range. He catches things that are just impossible. If he touches the ball, Dillon Thompson is going to pull it in.”

Thompson also sat out a few games in his senior campaign with a nagging groin injury, and but was productive nonetheless.

“One game we felt was going to be fairly easy, so we wanted to sit Dillon out,” Nafe said. “He wound up playing seven or eight plays and scored five times for us to help us win that game.”

Belhaven University is locate in Jackson, Miss. while Mississippi College is located just down the road in Clinton, Miss. Both Thompson and Allen will hope to be successful contributors on their respective rosters in the years to come.