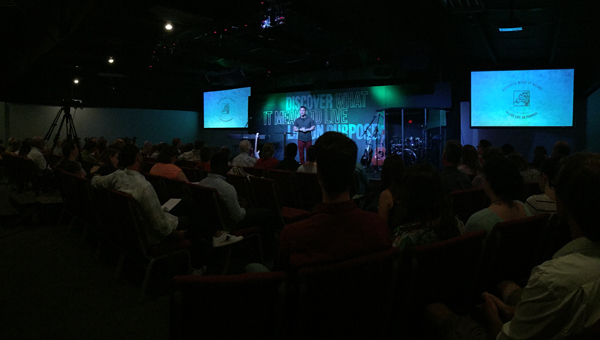 Alabaster’s Cultivate Church is holding a “God’s not white” series in September. (File)

“We want to look like our community,” Matthews said during an Aug. 18 phone interview. “We’ve got a diverse community of all races and backgrounds. We want to be open to everyone.”

Over the past year, the church’s leaders have been searching for ways to address what Matthews said is one of the biggest issues facing America.

“Fifty-three years ago, Martin Luther King Jr. said Sunday morning was the most segregated hour in America,” Matthews said. “Sadly, this is still true with eight in 10 churches having one predominant racial group.”

The church, which is at 395 First Street Southwest in Alabaster, found its inspiration in John 17, in which Jesus prays for the earth’s population to unite as one.

During the month of September, the church will hold a teaching and sermon series called “God’s not white,” during which the church will focus on uniting the community, Matthews said.

“We want to start a positive conversation about one of the biggest issues we face as a nation. Unfortunately, when you look at the national news, you see the negative side of that,” Matthews said. “We just want to take all the differences and stigma and division that goes on in the world and try to bridge the gap.”

Matthews said he is looking for Cultivate Church to “set a precedent” for all local churches.

“We want to take a stand and promote unity through diversity,” Matthews said. “We want to be welcoming to everyone.”

By NEAL WAGNER / Managing Editor COLUMBIANA – Attorneys for the Alabama Department of Public Safety have asked a Shelby... read more