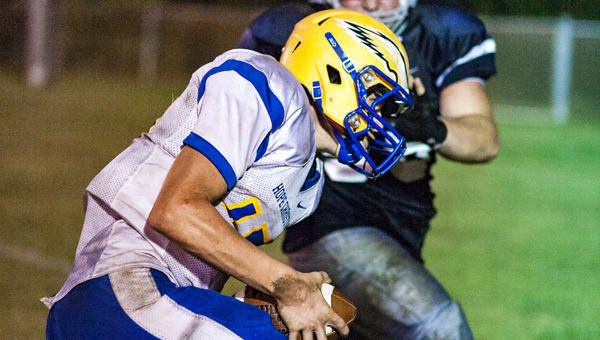 TUSCALOOSA – When the clock finally ran out on the season opener for the Hope Christian Eagles on Friday night in Tuscaloosa, the scoreboard read 62-44 in favor of the host team, North River Christian, and the time was 11:57 p.m. In the first game of the season for the young Eagles, they were forced to battle through some early adversity, as freshman quarterback Colin Kirkpatrick was knocked out of the game on the last play of the first half, and had to be carted off on a stretcher. He was taken to the hospital, according to Nafe, and has since been cleared to play moving forward.

North River Christian hung 30 points on the Eagles in the first quarter while Hope only managed eight. Hope could not dig out of that hole, and couldn’t pull closer than 16 points the rest of the way.

“We had one starter (from last season) on offense and two coming back on defense,” Nafe said on Aug. 19. “We have a lot of kids coming back with limited experience. In the first half we were just trying to find an identity.”

In one half of work, Kirkpatrick threw for 146 yards and a touchdown, and junior wide out Juan Cuellar was Kirkpatrick’s favorite target, as he hauled in 59 receiving yards, including a 16-yard touchdown strike. Cuellar also racked up 193 yards on the ground, which includes a kickoff he took to the house as well as another 40-yard kick return. Tyler Hubbard also scored from 17 yards out and 60 yards out as he racked up 102 yards rushing as well.

The Eagles made things interesting in the second half, but never pulled even. Regardless, Nafe took the positives away from the opener.

“I’m really optimistic after Friday night,” he said. “You never want to lose a game, but if you do lose one, you want it to be early in the season to a non-conference team. We’re not a seasoned, experienced team but I’m confident that we’re going to have a good season.”

By BAKER ELLIS / Sports Editor FRANKLIN, TENN.- In the first game of the young season for the Evangel Christian... read more