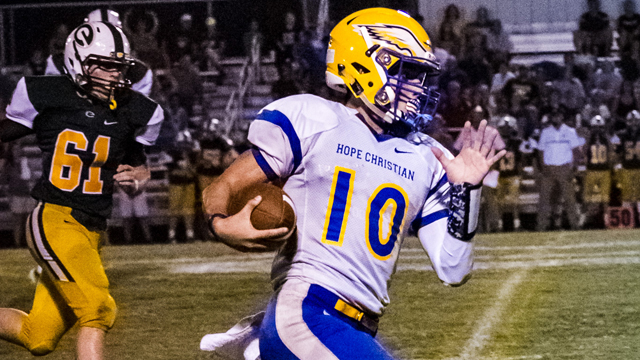 Hope Christian’s Juan Cuellar gets room to run during the Eagles 44-36 win over Edgewood Academy on Aug. 26. (Contributed / Twanna Arnold)

Coming into this season, Edgewood Academy was riding the longest winning streak in the nation, 71 games. In the offseason however, the Wildcats’ head coach unexpectedly resigned, which sparked a mass exodus of the top talent at Edgewood, and the Wildcats had their 71-game win streak snapped a week ago to Morgan Academy by a 46-0 final. However, this Edgewood team is still talented, according to Hope Christian head coach Tony Nafe.

“They’re young, but they have got some talent,” Nafe said after the game. “I couldn’t be prouder of our boys. This is our first 11-man game in 15 years and our first ever ACSC-AISA game.”

Hope hopped out to a big lead at the half before holding on to win in the end. Juan Cuellar had a stellar game, running for 184 yards and three scores to lead the way for Hope in this one.

“I could tell you 50 guys that played tremendously well,” Nafe said. “Juan had an incredible night, Andy Gilbert, Kerry Welch was a juggernaut on defense, Josh Patton, this was an incredible team effort.”

The win moves Hope Christian to 1-1 on the year, and the Eagles will now turn their attention to Lighthouse, who Hope will host on Sept. 2.