COLUMBIANA – A Shelby man was arrested and charged with a theft-related crime for the second time in about a month on the morning of Saturday, July 8.

Aaron Nu Gene Carden, 39, who lists an address on Fern Brook Lane, was arrested and charged with third-degree burglary and possession of burglar’s tools by the Shelby County Sheriff’s Office after he allegedly broke into a Shelby business. 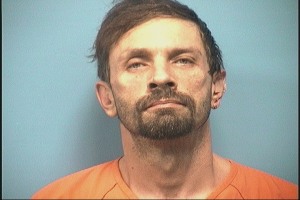 According to his arrest warrants, Carden allegedly entered the Shelby Country Store “with the intent to commit a crime therein” and was found in possession of bolt cutters and a crowbar.

A press release from the SCSO stated that Carden was found inside of the store and apprehended after he tried to escape through a hole in the wall.

Carden was previously arrested and charged with third-degree robbery on June 7 for allegedly using force or threats against an individual to steal “beer, beef sticks [and] snack sticks” from another store in mid-May.

Carden remains in the Shelby County Jail on bonds totaling $10,000.

Both third-degree robbery and third-degree burglary are Class C felonies. If convicted, Carden could face up to 10 years in prison and a maximum of $15,000 in fines.

“Thanks to their attention and dedicated service, this business did not lose any of its property and the offender was quickly arrested and taken to jail,” the press release read.