“The American Village is pleased to join the Shelby County Reporter in recognizing Lt. Col. Vickie Walker Gavin as Veteran of the Week,” American Village founder and CEO Tom Walker said. “She is representative of the hundreds of thousands of Alabamians who have risked it all for the sake of our country and its freedom. To all veterans we owe a debt we can never fully repay.” 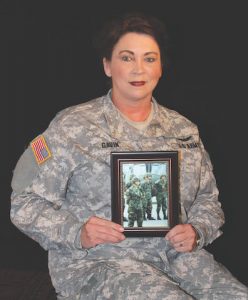 Here are the highlights about this week’s Veteran of the Week: Lieutenant Colonel Vickie Walker Gavin was born in 1961 in Nashville, TN. She served in the United States Army from 1984 to 2012. Vickie was recruited into the Army right after high school. Her father was initially against it, but after learning that they would pay all her college costs, all her books, plus $100 a month to live on, he gave her his blessing. She learned to fly helicopters, achieved a leadership position and the rank of Lt. Col. during her service.

In His Own Words: “I’m very proud to have served in the United States Army. I think it makes you grow up and mature. It definitely instills in you ‘yes, ma’am and no, ma’am’. I think it would be beneficial if all young people served in the military in some role.”