“The American Village is pleased to join the Shelby County Reporter in recognizing 2nd Lt. Matthew Alexander Blount as Veteran of the Week,” American Village founder and CEO Tom Walker said. “He is representative of the hundreds of thousands of Alabamians who have risked it all for the sake of our country and its freedom. To all veterans we owe a debt we can never fully repay.” 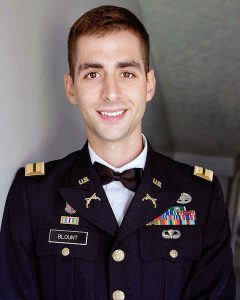 The Veteran of the Week this week is 2nd Lt. Matthew Alexander Blount. (Contributed)

Here are highlights about this week’s Veteran of the Week. Matthew Alexander Blount, second son of Barry and Terrie Blount of Pelham, was born on Sept. 18, 1981. He was a member of Pelham First Baptist Church and was a 1999 graduate of Pelham High School. He joined the U.S. Army in the same year, serving until 2006. During his military career he advanced in rank to staff sergeant serving tours of duty in Germany as Senior Instructor, Medical/Treatment and in Iraq as Senior Field Medic. Blount received the Army Commendation Medal and the Combat Field Medic Badge for his service in Iraq.

After receiving an honorable discharge from active duty in 2006, Matthew transferred to the United States Army Reserve and enrolled in Jacksonville State University ROTC. In November 2009 Matt was diagnosed with cancer in advanced stage. He remained active in school and ROTC while undergoing treatment. He went on to finish in the top 4 percent of the National Order of Merit list of the ROTC. He served as the ROTC Executive Officer and was a member of many National Honor Societies that included Phi Kappa Phi Pinnacle, Alpha Phi Sigma, Scabbard and Blade and Lambda Alpha Epsilon. Matthew graduated with honors in April 2011 with a Bachelor of Science in Criminal Justice.

Matthew was also the recipient of the Silver Physical Fitness Award, the Department of the Army Superior Cadet Decoration Award and was the first from Jacksonville State University to received seven medals at the LAE’s Southern Regional Competition. Just days prior to his death in 2012, Matthew received his commission as second lieutenant in the U.S. Army Reserve.

Second Lt. Blount is the namesake of American Legion Post 555 in Pelham. The American Legion Matthew Blount Post 555 is dedicated to uphold the principles of God and the Constitution of the United States of America; To provide support to veterans that have defended and served our country; To preserve the memory of those who made the ultimate sacrifice for freedom; To be a local entity initiating and supporting programs that benefit the community and its youth.