“The American Village is pleased to join the Shelby County Reporter in recognizing Lt. Col. Robert Glenn Nivens as Veteran of the Week,” American Village founder and CEO Tom Walker said. “He is representative of the hundreds of thousands of Alabamians who have risked it all for the sake of our country and its freedom. To all veterans we owe a debt we can never fully repay.” 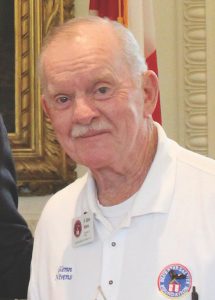 Here are highlights about this week’s Veteran of the Week: Lt. Col. Robert Glenn Nivens was born in Chelsea in 1940. His hometown is Harpersville. Nivens enlisted as a private at age 17 in 1956 and retired May 1, 1986, as a lieutenant colonel after serving 29 years in the U.S. Army as an infantry commander in Germany, Korea, France and two tours in Vietnam. He received the Meritorious Service medal from the Department of the Army, the Combat Infantry badge, the Bronze Star medal and Army Commendation medal. Nivens has given his life to serve his country both as a career military soldier and in retirement. He is the founder of the Blue Star Salute Foundation, Inc. and serves on the Support Committee for the Alabama National Cemetery.