“The American Village is pleased to join the Shelby County Reporter in recognizing Lt. Col. Gene Quick as Veteran of the Week,” American Village founder and CEO Tom Walker said. “He is representative of the hundreds of thousands of Alabamians who have risked it all for the sake of our country and its freedom. To all veterans we owe a debt we can never fully repay.” 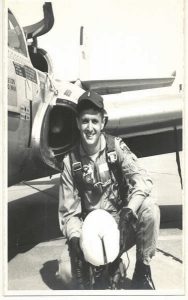 Here are highlights about this week’s Veteran of the Week: Gene Quick was born in Birmingham in 1939. His mother, Fay Falkner Quick, was the first female elected to public office as Shelby County tax collector. His grandfather James Jefferson Falkner and Uncle Kirk Falkner were Shelby County sheriffs in the 1920s. Quick graduated from Shelby County High School in 1958 and graduated from Auburn University in forestry and ROTC in 1963.

All his life, Gene wanted to fly fighter airplanes. After graduation he was commissioned as a second lieutenant in the U.S. Air Force and entered pilot training. He was deployed to Vietnam in March 1966 with the 389th Tactical Fighter Squadron. After Vietnam, Gene became an instructor pilot. In 1970 Capt. Quick ended his active tour in the U.S. Air Force and joined the Florida Air National Guard in Jacksonville, Fla., where he flew in the air defense of the southeastern United States. Col. Quick retired on Dec. 31, 1989. Among his many medals are the Distinguished Flying Cross and Air Medal.

In His Own Words: “I flew up to my last day of retirement. Over the years I flew the F-4, T-37, F-102, F-106 and F-16. I remember on Good Friday 1987, I was ‘Flight Lead’ off the coast of Florida when my Wing Man and I intercepted a Soviet antisubmarine warfare plane, the first encounter of F-16 with a Russian ‘Bear’. We escorted the plane out of U.S. air space and he flew back to Cuba. I was able to serve and extremely proud to have served. I feel that every citizen is obligated to serve our country in some way. But there is a smaller group who are absolutely committed to serving in the military. I would go back tomorrow if I could.”