“The American Village is pleased to join the Shelby County Reporter in recognizing Chief Petty Officer Lance Curtis Wentworth as Veteran of the Week,” American Village founder and CEO Tom Walker said. “He is representative of the hundreds of thousands of Alabamians who have risked it all for the sake of our country and its freedom. To all veterans we owe a debt we can never fully repay.” 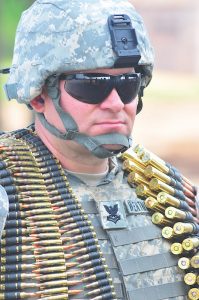 Chief Petty Officer Lance Wentworth is being recognized as this week’s Veteran of the Week. (Contributed)

Here are highlights about this week’s Veteran of the Week: Chief Petty Officer Wentworth enlisted in the Navy Reserve in December 2000, and attended Recruit Training Command in Great Lakes, IL. As a member of a joint reserve service unit, mobilized to Iraq for a 12-month deployment in 2007 as a Contracting Officer Representative, his duties included property reutilization, demilitarization and disposal of excess government property. During this deployment he volunteered for temporary duty at Bagram, Afghanistan for 2 months to provide urgently needed support. His dedication and distinguished performance during this time resulted in receiving Sailor of the Quarter. He again deployed to Iraq in 2009 contributing to the draw-down of bases in Iraq. During his third deployment he saw duty in Afghanistan as the Leading Petty Officer of a 12-member team, ensuring his team members were effectively trained to clear the Afghanistan battle space of excess and unusable government property. Chief Petty Officer Wentworth was chosen as Sailor of the Year in 2013 for NOSC Bessemer, AL.

In His Own Words: “One team, one fight!”