“The American Village is pleased to join the Shelby County Reporter in recognizing Lieutenant Ensign Billy Dabbs as Veteran of the Week,” American Village founder and CEO Tom Walker said. “He is representative of the hundreds of thousands of Alabamians who have risked it all for the sake of our country and its freedom. To all veterans we owe a debt we can never fully repay.” 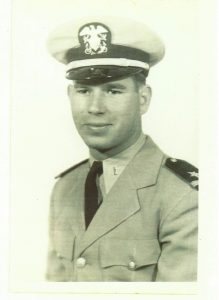 Lieutenant Ensign Billy Dabbs is being recognized as this week’s Veteran of the Week. (Contributed)

Here are highlights about this week’s Veteran of the Week: Billy Dabbs was born in Hueytown in 1922. Billy enlisted in the Navy from the University of Alabama, where he was attending college on a football scholarship. He participated in V12 training at Howard College, then completed training in Fort Pierce, Florida (the origin of the famous Navy SEAL “Hell Week”). Billy became an officer of Underwater Demolition Team 25. He deployed with his team from Florida to California to Hawaii and then Japan. He served ably in the Pacific Theater until Japan capitulated, ending WWII. Billy, his wife Mary Louise, and their children lived many years in Montgomery. Billy died in 2008.

In His Own Words: “Be un-careless.”