“The American Village is pleased to join the Shelby County Reporter in recognizing Annie Laurie Holcombe Hill as Veteran of the Week,” American Village founder and CEO Tom Walker said. “She is representative of the hundreds of thousands of Alabamians who have risked it all for the sake of our country and its freedom. To all veterans we owe a debt we can never fully repay.” 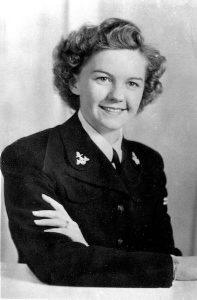 Annie Laurie Holcombe Hill is being recognized as Veteran of the Week. (Contributed)

Annie Laura (Holcombe) Hill was born in Montevallo, AL, where her family still resides. She served her country with honor in the U.S. Navy (WAVES) in World War II.

Annie Laura (Holcombe) Hill enlisted in 1942 and was initially trained in Iowa. She was later stationed in Washington, D.C. Annie was a graduate of the University of Alabama.