“The American Village is pleased to join the Shelby County Reporter in recognizing Lieutenant Colonel Leo Thorsness as Veteran of the Week,” American Village founder and CEO Tom Walker said. “He is representative of the hundreds of thousands of Alabamians who have risked it all for the sake of our country and its freedom. To all veterans we owe a debt we can never fully repay.” 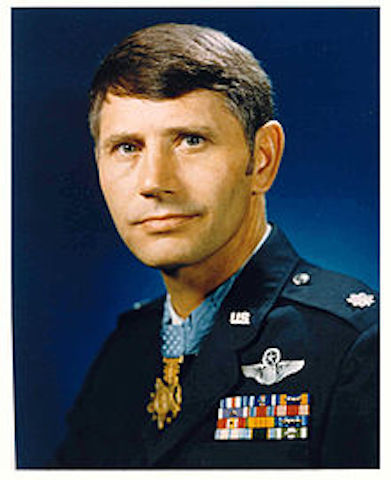 Lt. Col. Leo Thorsness is being recognized as Veteran of the Week. (Contributed)

Here are highlights about this week’s Veteran of the Week: Leo Keith Thorsness was born in 1932 in Walnut Grove, MN, where his family had a farm. He now calls Madison, AL his home. Leo enlisted in 1951 at the age of 19 because his brother was serving in the Korean War. Leo became an Air Force fighter pilot. He served his country with honor in the U. S. Air Force during the Vietnam War. He was assigned to the 355th Tactical Fighter Wing based in Takhli Royal Thai Air Force Base in Thailand, flying as aircraft commander in F-105Fs, tasked with locating and destroying North Vietnamese surface-to-air missile sites. He was shot down over North Vietnam on April 19, 1967. During the mission, while knowingly running low on fuel, he continued to fly a circular route over other downed pilots to advise the Air Force of their parachute landing zone. He wasn’t scheduled to fly that day, but volunteered to replace a crew that was grounded with mechanical troubles. Leo was captured and spent six years as a Prisoner of War where he was held in solitary confinement for a year and repeatedly subjected to torture. He was awarded the Medal of Honor during his captivity, but Congress kept this secret until his release in order to protect him. He retired from the Air Force on October 25, 1973 following his release. In his youth, Leo earned the Eagle Scout Award from the Boy Scouts of America. He is one of only nine Eagle Scouts to receive the Medal of Honor. He was also awarded a Silver Star, Bronze Star, Distinguished Flying Cross, and Purple Heart Medal. Lieutenant Col. Leo K. Thorsness died on May 2, 2017 in St. Augustine, FL at the age of 85.