“The American Village is pleased to join the Shelby County Reporter in recognizing Staff Sergeant Delbert Hiestand as Veteran of the Week,” American Village founder and CEO Tom Walker said. “He is representative of the hundreds of thousands of Alabamians who have risked it all for the sake of our country and its freedom. To all veterans we owe a debt we can never fully repay.” 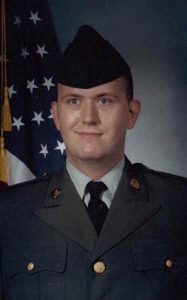 Staff Sgt. Delbert Hiestand is being recognized as Veteran of the Week. (Contributed)

Here are highlights about this week’s Veteran of the Week: Delbert Hiestand was born in Birmingham in 1960. He served from June 3, 1985 to Sept. 24, 1996 in the Alabama Army National Guard 20th SFG 167th COSCOM and later in the 2d BCE with the U.S. Army Reserves as an Image Interpreter and Intel Analyst. While with the 167th COSCOM, Del earned Soldier of the Month, Soldier of the Quarter, Army Achievement Medal for unit prep for Vulcan Knight 1986 and REFORGER 1987. Del earned a second Army Achievement Medal, National Defense Medal with the 2d BCE. He left service with an honorable discharge on 24 September 1996 with the rank of Staff Sargent. As a civilian Del was a Firefighter/Paramedic with the City of Homewood, Alabama Fire and Rescue Service, retiring in 2011 with 25 years of service.

In His Own Words: “I was honored to serve in the United States Army and defend the Constitution and wear the uniform as many of my ancestors have since the American Revolution.”