“The American Village is pleased to join the Shelby County Reporter in recognizing Petty Officer Richard Ray Green as Veteran of the Week,” American Village founder and CEO Tom Walker said. “He is representative of the hundreds of thousands of Alabamians who have risked it all for the sake of our country and its freedom. To all veterans we owe a debt we can never fully repay.” 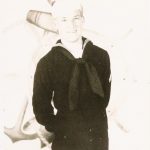 Petty Officer Richard Ray Green is being recognized as this week’s Veteran of the Week. (Contributed)

Here are highlights about this week’s Veteran of the Week: Richard Green was born in Birmingham in 1929. He enlisted in the Navy on Oct. 4, 1950, and served in the Korean War. He was assigned to the USS-1110 and served on that ship in 1951 and 1952. This was a supply ship that carried Jeeps and oil to the Arctic Circle to supply NORAD (early warning system). When the ship returned to its home port of San Diego, California Richard married Elsie Ruth Mellown on Sept. 18, 1952. He was then reassigned to the attack supply ship Andromeda AKA-15 and was deployed to Yokosuka, Japan. This was a refrigerated supply ship that carried goods from Yokosuka to Pushon and Inchon, South Korea. Since they were a refrigerated ship they would also occasionally bring back the bodies of those killed in action. During the trips to South Korea the Andromeda was continuously followed by Chinese submarines but was never fired upon. After being honorably discharged in October of 1954, Richard returned to his job at U.S. Steel in Fairfield, Alabama, until he retired in 1982.

In His Own Words: “When our ship would be docked in Anchorage, Alaska, there was usually a salmon run where the fish would spawn on the gravel beds in the inlet. We would go out with burlap bags and gather the fish by hand and bring them back to have fish fries. They would be cleaned and then cooked on three big grills that were set out on the dock.”