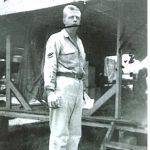 Staff Sgt. Gray McMillian Strother Jr. is being recognized as Veteran of the Week. (Contributed)

“The American Village is pleased to join the Shelby County Reporter in recognizing Staff Sergeant Gray McMillian Strother, Jr. as Veteran of the Week,” American Village Founder and CEO Tom Walker said. “He is representative of the hundreds of thousands of Alabamians who have risked it all for the sake of our country and its freedom. To all veterans we owe a debt we can never fully repay.”

Here are highlights about this week’s Veteran of the Week: Gray Strother, Jr. was born at Canton Bend near Camden, Alabama in 1917. He served his country with honor in the U.S. Army Air Corp in World War II, serving in the Philippines and New Guinea. Gray graduated from Wilcox County High School in 1934 and married Nell Lula Sanders in 1939. They had one child, Nellie Gray (Strother) Easterwood. During the war Gray was stationed at Craig Field in Selma until he was deployed to the Philippines. He achieved the rank of Staff Sergeant. During the war he wrote more than 800 letters to his wife Nell. After the war Gray worked for Tennessee Coal and Iron and Liberty National Life Insurance Company. From 1953 to 1973 he worked for Westinghouse in Montevallo. Both Gray and Nell were faithful members of Wilton Baptist Church and later Montevallo Baptist, and Gray served as a deacon throughout his time at both churches. He also served on the Wilton City Council and even has a street named in his honor.