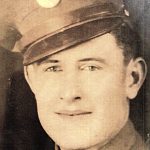 Master Sgt. James Gerald Cates is being recognized as Veteran of the Week. (Contributed)

“The American Village is pleased to join the Shelby County Reporter in recognizing Master Sgt. James Gerald Cates as Veteran of the Week,” American Village founder and CEO Tom Walker said. “He is representative of the hundreds of thousands of Alabamians who have risked it all for the sake of our country and its freedom. To all veterans we owe a debt we can never fully repay.”

Here are highlights about this week’s Veteran of the Week: Master Sgt. James Gerald Cates served his country with honor in the United States Army in both World War II and the Korean War. Known to his family as “Jabbo,” he re-enlisted from Georgia when the Korean War began and was a member of Company I, 3rd Battalion, 31sst Infantry Regiment, 7th Infantry Division. He was reported missing on Dec. 3, 1950 during the Battle of Chosin Reservoir. A total of 1,029 died in the battle, and he was among the 4,894 reported as missing. Most have still not been identified or found. His remains were accounted for on May 31, 2019. He was interred on September 21, 2019 at Turnerville Cemetery in Chunchula, Alabama.