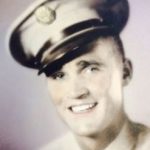 “The American Village is pleased to join the Shelby County Reporter in recognizing Private First Class Cecil Edwin Harris as Veteran of the Week,” American Village founder and CEO Tom Walker said. “He is representative of the hundreds of thousands of Alabamians who have risked it all for the sake of our country and its freedom. To all veterans we owe a debt we can never fully repay.”

Here are highlights about this week’s Veteran of the Week: Cecil Edwin Harris was born in Shelbyville, Tennessee, in 1926. He served in the U.S. Army in a Rifle Platoon, Company D, 179th Infantry Regiment, 4th Infantry Division in northern France during World War II. He was killed in action on Jan. 2, 1945, and declared missing in action after his unit engaged the Germans near Dambach, France. His remains were undiscovered until September 2013 when a French hiker found the grave. His dog tags, buried along with him, confirmed his identification. He was buried at Arlington National Cemetery in late October 2014 with full military honors. PFC Harris was posthumously awarded the Purple Heart, the Bronze Star, the Combat Infantry Medal and the World War II Victory Medal for his gallant service to his country.