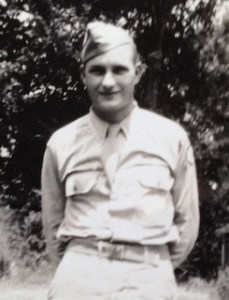 “The American Village is pleased to join the Shelby County Reporter in recognizing Staff Sergeant Henley T. Carter as Veteran of the Week,” American Village founder and CEO Tom Walker said. “He is representative of the hundreds of thousands of Alabamians who have risked it all for the sake of our country and its freedom. To all veterans we owe a debt we can never fully repay.”

Henley T. Carter was born in Stanton, Alabama, in 1925. Carter was a member of Company F 331st Infantry Regiment, Lightning Bolt Division. He served in World War II from 1944-1946. He left Southampton 12 days after D-Day, walking 1,408 miles from Omaha Beach through the Loire Valley, from France to Luxembourg, Belgium, Holland, Rhineland and Germany, to the Elbe River 65 miles southwest of Berlin, arriving on 13 April 1945. The 83rd Division wasn’t just on the front line; most of the time they were in the center of the front line. They were in combat 244 days, in hedgerows first and on Carentan-Periers Road, in fields flooded by Germans making them swamps, to River Taute and on to Auxais, St. Malo, Brest, Nantes, Orleans and Paris. They liberated Luxembourg, battled in Ardennes, in the German Bulge, and were the first to cross the Rhine. They raced across Germany, covering 280 miles in 13 days. The 83rd had 23,980 casualties and a 170.2 percent replacement rate. Of 68 U.S. Army divisions deployed in the European Theater, the 83rd had the ninth-highest combat deaths. Carter and his fellow GIs destroyed 480 enemy tanks, 61 enemy planes, 29 enemy supply trains and 996 enemy artillery pieces.

The only time Mr. Carter mentioned his WWII experiences was in response to this statement: “I saw the movie PATTON last weekend and couldn’t believe all that was in that movie.” The reply: “I walked all the way across Europe with that bastard one time.”